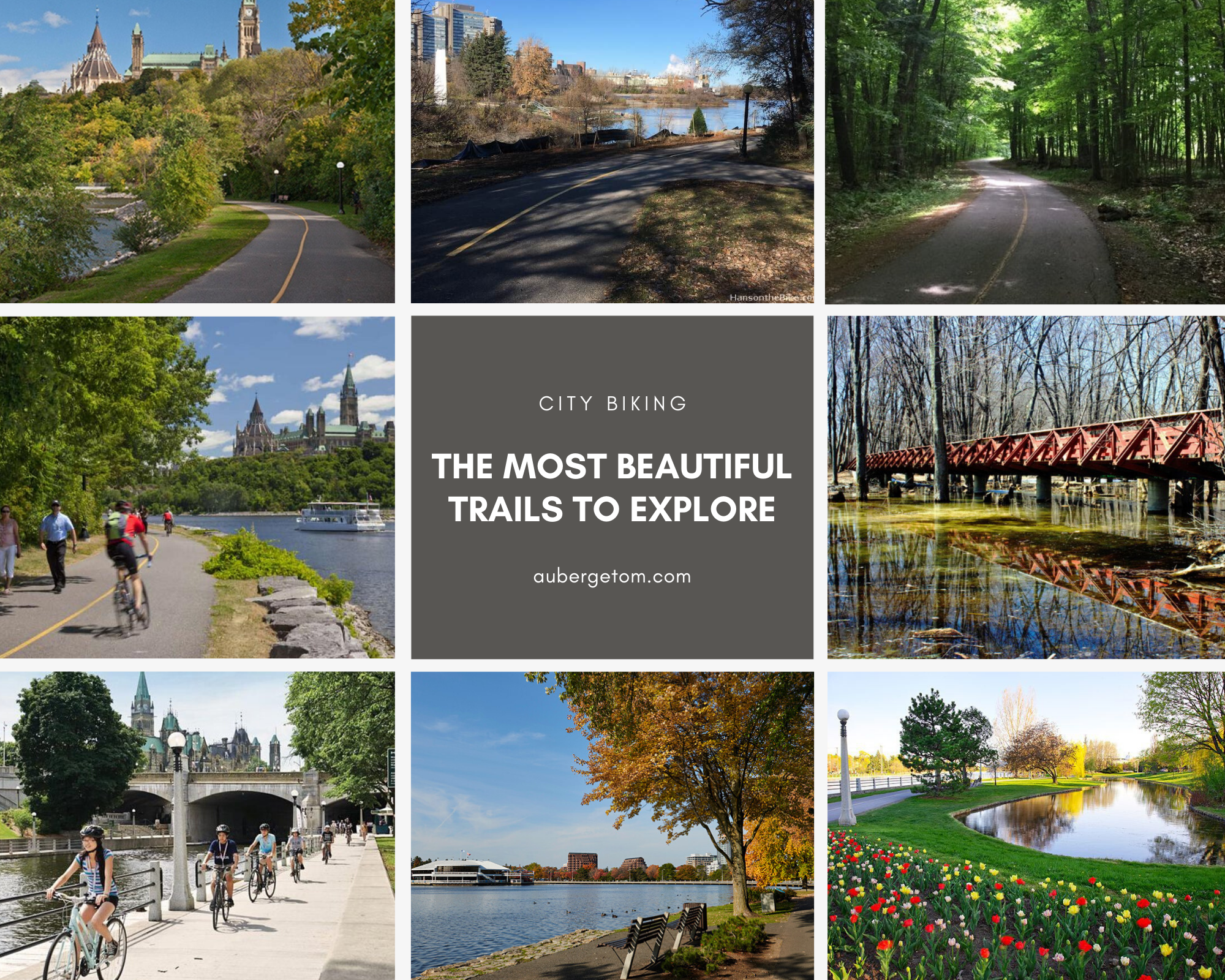 Tom's Blogs > Category: Hiking & Cycling > The Most Beautiful Bike Paths To Explore In The City

THE MOST BEAUTIFUL BIKE PATHS TO EXPLORE IN THE CITY

What could be better than visiting a city by bike to appreciate all its details and subtleties! Here in the Outaouais, the tourism bicycle is in the spotlight thanks to the many cycling paths that cross or circle both sides of the Ottawa River, allowing you to visit the region at your own pace and according to your desire of the moment.

I have chosen for you the most beautiful cycling paths in Gatineau and Ottawa. They all have the characteristic of crossing bucolic landscapes and the great majority of them border a watercourse. Some even offer the most beautiful views on the two cities and their famous buildings.

One of the advantages of writing this blog is that having lived in the region most of my life, I know these tracks by heart for having taken them so many times that it is difficult for me to give you an exact number. So I'm speaking to you from experience and I'm very excited that you will be able to explore them as well.

Oh yes, we have two very good bikes equipped with saddlebags that we gladly lend to our guests. If you ever want to go on these trails, but don't own a bike, the problem is solved. Come on, let's go! Have a good read and a good ride!

Route Verte 1 spans the province of Quebec and the section that runs through Gatineau, the Voyageurs Pathway, skirts the Ottawa River while offering magnificent views of the city of Ottawa. This trail, the most beautiful in my opinion, will take you through very different natural settings and, at times, will make you think you are miles away from the city. But what makes this trail so attractive are the different viewpoints that line the pathway from beginning to end. You'll want to make regular stops to admire the scenery, so give yourself time to stroll along it.

*High traffic means that the high number of people on the trail will force you to limit your speed and watch out for pedestrians and other strollers.

The Gatineau Park Trail begins on de la Mine Rd between Maître-Burger and du Quartz streets and crosses Gatineau Park to end at Alexandre-Taché Blvd. Although it winds mainly through the forest, it occasionally crosses the Gatineau Parkway*. This trail is ideal for those who want to ride in complete tranquility, away from the crowds and noise.

Viewpoints: trail mainly in the forest, under the canopy of trees

These two trails are a very interesting transit route between the Gatineau Park Pathway and the Voyageurs Pathway (Route Verte) via Leamy Lake. For nearly 10 km, you will encounter diverse landscapes, most of which are in the great outdoors and far from the noise of the city, even though the latter is never far away.

The Leamy Creek Pathway starts at the Gatineau Park Pathway and continues to the Gatineau River Pathway 5.6 km further on. This trail quickly exits Gatineau Park, crosses Cité-des-Jeunes Blvd, meanders under a canopy of trees to Highway 5, continues to Highway 105 (St. Joseph Blvd.) and ends on the other side of the boulevard at the junction of the Gatineau River Pathway (tunnels take you safely across both roads). This beautiful trail is the beginning of a route that will take you to Lake Leamy Park.

The Gatineau River Pathway begins at the junction of the Leamy Creek Pathway and ends at Fournier Blvd, at the eastern boundary of Leamy Lake Park, 4.3 km away. Starting under a canopy of trees, this trail will give you a quick glimpse of the river and will follow it all the way until it ends. Once you arrive at Lake Leamy, you could take the Lake Leamy Pathway and loop around the lake before continuing on to the Route Verte. Lake Leamy beach is a nice place to stop for a break where you will find public washrooms, a snack bar and picnic tables. The Gatineau River Pathway and the Leamy Lake Pathway both lead to the Voyageurs Pathway (Route Verte).

Features: Fully paved; easy to intermediate route; low to medium traffic depending on the sector and the time of day; 9,9 km from the Gatineau Park Pathway to Fournier Blvd (plus 2.4 km if you do the loop around the lake)

From downtown Ottawa to Britannia Beach, the Ottawa River Pathway (Trans Canada Trail) follows Sir John A. MacDonald Drive* along the banks of the river. To the east, the views of downtown Ottawa and Gatineau are magnificent, while to the west, the view of the river is ever-present and equally captivating. At times, it feels like you're in the country and yet you're in the city. From this trail, you will see rapids, cross parks and beaches, and you can travel to Chinatown, Little Italy and Westboro, as well as to Gatineau via the Samuel de Champlain Bridge.

*Nokia Sunday Bikedays: Sir John A. MacDonald Drive is closed to automobiles in both directions every Sunday morning from 9:00 a.m. to 1:00 p.m. from June to September.

From Rideau Hall (residence of the Governor General of Canada), you can drive to Petrie Island Beach on the pleasant Ottawa River Trail, which will take you on a scenic ride with its interesting sites and beautiful views.

To get to Rideau Hall, simply go to the National Gallery of Canada (across the Alexandria Bridge) and head east on Sussex Street. Drive past Rideau Hall and continue for a few meters to the roundabout where you will see the access to the pathway that begins at this very spot, just after the exit to Princess Avenue.

The Rockcliffe Park area is known for its large and prestigious properties, most of which are home to embassies and high dignitaries. And because it is built on top of a cliff, the view of the Ottawa River, Gatineau and the region is breathtaking.

IMPORTANT: At the Ottawa New Edingburgh Club, you have two options: either continue straight on the same pathway that becomes the Aviation Pathway and follows the Sir Georges-Étienne Cartier Parkway* or take the Ottawa River Pathway on the left, which descends towards the river and follows the riverbank for several kilometers. The Aviation Pathway joins the Ottawa River Pathway a few kilometers further along.

Features: Paved with some gravel sections, especially along the Ottawa River shoreline; easy to intermediate route; medium to high traffic (depending on location); 23.3 km from the National Gallery of Canada to Petrie Island

*Nokia Sunday Bikedays: A significant portion of Sir George-Étienne Cartier Parkway is closed to motorists in both directions every Sunday morning from 9 a.m. to 1 p.m. from June to September.

Bicycle paths along the waterways seem to be popular because they run through greenbelts with the city - and its services - never far away. The Rideau Canal pathways are no exception, and are particularly valued for the beauty of the often bucolic scenery they offer to those who use them, and for their proximity to commercial arteries. Fancy a coffee or ice cream? You can do so by branching off onto a small adjacent street that will take you to a welcoming terrace in no time at all.

The Rideau Canal is unique in that it is bordered by two distinct pathways. On the east bank, it is the Colonel By Drive pathway and on the west bank, it is the Queen Elizabeth Driveway pathway. A few cross bridges span the canal, allowing you to easily switch from one path to the other.

The Rideau Canal Eastern Pathway runs along Colonel By Drive* and offers views of the city as it emerges on the other side of the canal. From Rideau Street at Wellington, it will take you to the beach at Mooney's Bay Park via south Dows Lake. This trail is ideal if you want to enjoy nature, wide open spaces and urban beaches.

*Nokia Sunday Bikedays: Colonel By Drive is closed to automobiles in both directions every Sunday morning from 9:00 a.m. to 1:00 p.m. from June to September.

The Rideau Canal Western Pathway runs along Queen Elizabeth Driveway and offers views of the lush flowerbeds, small ponds and beautiful ancestral homes of the Glebe neighbourhood. From Confederation Park on Laurier and Elgin Streets, it will take you to Hartwells Lockstation via north of Dow's Lake. This trail is ideal if you want to stay close to downtown to take advantage of its many tourist attractions.

The Rideau River Eastern Pathway begins at Rideau Falls and follows the course of the Rideau river to Mooney's Bay Park. It is further from downtown than the canal trails and offers few views of the city, but its scenery is still enjoyable because of the greenery that surrounds it at all times and the continuous presence of the river.

Download your FREE Guide on exploring 12 fantastic sites in Chelsea and surroundings, to help you plan your holiday.